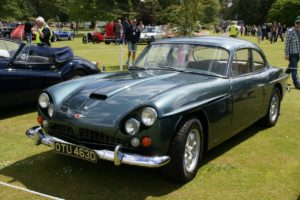 History: This car was registered in March 1966 and delivered to its first owner who lived in the Manchester area. The first owner then took the car on his retirement to the Isle of Man in 1981, keeping the car for 30 years before it returned to the UK mainland in 1996 when it recovered its original Manchester area licence plate from the DVLA. From the paperwork available the car appears to have had four prior owners when the current owner purchased the car in February 2011.

The car was used for about a year to learn its idiosyncrasies before embarking between 2012 and 2016 on a fully documented comprehensive restoration at Hightone Restorations including full mechanical, bodywork, upgraded electrical wiring, leather interior, carpets, headlining and refreshed woodwork.

After several local trips in the UK she undertook a major continental tour following restoration to Germany and the Czech Republic for the German JOC weekend in Chemnitz/Dresden in September 2017.

MOT: Although the car does not require an MOT she was tested and the MOT runs to 15th May 2019 and has no advisories.

Restoration: Fully photographed (over 250 photographs) detailing the restoration together with invoices, receipts and supporting paperwork.

Paperwork: covers some earlier history of the car including its time in Isle of Man, letter from the original owner, facsimile of original factory PDI and warranty sheets, original sales brochure and handbook.

Mileage:  Based on available paperwork the current indicated mileage of just under 65,500 is believed to be correct.